I've finished the first round of bread for Okasaneko and myself. We'll each get half of these. These loaves would also look rather familiar to some. That's because I made similar ones a while back while I was experimenting. I really need to expand my range of bread, I don't want to be making the same ones over and over again. I do think the cuts on the short loaves are too deep, but nothing I can do about it now. At least this time I got the baguette scaled properly. :P Still need to cover it with some matte varnish though. Next I'll make some melon pan turtles and look up some other types of bread to make, I don't think what I've done so far is nearly enough to fill the shelves. Plus the more variety the better!

I've also included some pics of a Sylvanian figurine next to the bread, and some in a bakery window. The windows still look rather bare, so I need to make more goodies to fill it up! Speaking of Sylvanians, I got this set a few weeks back, and it's one of the most adorable things ever!

It was also an excuse to get that three tier bunk bed, which has darker coloured bedding in this release (it has pastel tones in the regular release). I'm still not really sure where to put this set though. Maybe I should make a very simple little room out of styrofoam and wood for this? :P

I used my accumulated points on BeHappy's site to buy this, which meant that I ended up not having to pay for shipping. I probably would not have gotten it otherwise. I think at AUD36.49, BeHappy offers the best price for this set online. I've not seen cheaper anywhere else. On ebay it's available from various sellers from around AUD51 - 61, not including shipping (ouch).

Anyway, here's a pic of some adorable baby critters: So much for updating twice a week... :p
Anyway I want to blog about these lovely phone covers from Okasaneko. She sent them as a gift and I have to say I absolutely love them. I had thought I would like the black one better from her pictures, but I've ended up falling hard for the pink one. Look at it! It's so cute and pink! I've loved pink as a young girl (what young girl doesn't like pink? All the 3-4 year old girls at the kindergarten I volunteer at seem obsessed with the colour) and tried to switch to liking the 'cooler' black as a teen--to the point where I got some rather ill advised thick black framed glasses that I thought would make me look cool but ended up making me look like a grandmother instead... Now I'm back to admitting that I really do love pink, especially pastel pink. That's not to say I don't like the black cover, I think it's pretty awesome as well. It's great having two phone covers I can switch back and forth with. Thanks very much again Pinky! It's that green grass-like matting that you find on produce shelves in the supermarket. I was able to pick up several rolls that were being thrown away. They're a little dirty, and in one of the mats the dirt is so fine that I haven't been able to remove it completely. These are really great for my display shelves. Since I don't like just displaying items by themselves, I'm working on a number of dioramas on my bookshelves to display my stuff.

The green makes excellent grass, a lot better than the green felt I've been using. You can see a bit of it at the top of the pic. I don't have very good pictures of my shelves, I need to set up a better light source. The grass is only the beginning, I'm planning to add flowers, a blue 'sky' backdrop, fences and maybe a couple of bushes or trees. I took some other pictures for this post but they didn't come out very well, so I'm going to redo them over the weekend. I will probably not have time till then.

I'm currently playing Fallout 3, and it's really fun. I actually started playing last year and never really went past Megaton, which is like, one of the first areas you get to. I restarted again recently with a brand new character and I've been hooked. The world in all its ruin is an awesome place to explore, it's full of fifties inspired surroundings and the old fashioned music somehow really suits the post-apocalyptic feel of the game. Love it. Too much, because my right hand hurts now. The picture is a Rad-Away ad because I can't find my screenshots. :/

I also want to say that I just got a call from the local primary school for a relief teaching job on Thursday. YAY! Finally! I've been volunteering in schools for quite a long time, hoping to get noticed and get a call to come in. I'm a bit nervous about this assignment, and the nervousness will continue to grow as it gets nearer to the day. I got an assignment to do four hours in a kindergarten last week and I couldn't sleep the night before. :/ And I've been volunteering at that kindy every week for the last 1.5 years! I know all the kids and the routines! I don't know anything about the primary school's routines because I've never volunteered there. >_< I hope I do well. Can I have some prayers and good wishes? :D I hope that once I start really working for the schools I'll get more calls, especially next term (there's only two weeks left into this term). I'm going to go bother the other schools sometime this week to see if they have anything lined up for next term which I can hopefully do.
Posted by Pei the Blargh at 23:08 No comments: 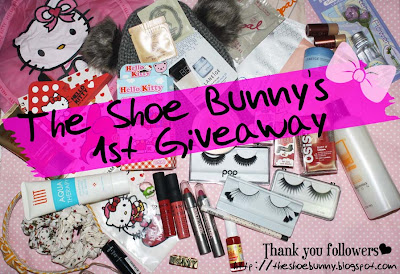 The Shoe Bunny is having an awesome giveaway over at her blog. I found out about it quite late, that's why I'm only posting about it now. There's still a day left and details are here: http://theshoebunny.blogspot.com/2011/08/100-followers-giveaway.html
Posted by Pei the Blargh at 21:13 No comments: Hugh: Daddy, I'm bored. Are we there yet? Where are we going anyway?

Benjamin: There's no earthly way of knowing
Which direction we are going.
There's no knowing where we're rowing
Or which way the river's flowing.
Is it raining?
Is it snowing?
Is a hurricane a blowing?

Hugh: DADDY! Stop being scary! We're not even near the river! I've been working on some bread, both for my bakery and for Okasaneko. It's giving me a good practice so far. I'm also hoping that this project will start to give me enough incentive to get off my ass and start making things more often. I've wanted to make things for friends for a while now, but I've always procrastinated too much. Bad, bad, bad Pei. Bad. Here are the loaves that I've made; they're really basic items from Betsy's tutorial that I've made before, with a few modifications to the way the cuts on the short loaves look.

Since I've made these before and know the colour mixes you'd think it would taken less time than almost three hours to just make the basic shape and texture the bread! I think sometimes that I'm too picky and I keep redoing the bread if the cuts don't look right. They still don't look 100% right, but I think I should leave it as it is lest I knead more dust into them... Ugh dust! The bane of any clay miniaturist!

My previous project has not gone so well. I lack piping skills and these are the result.

Look at all those horrible smears! I kept wiping the icing off the cupcakes because they were the wrong size, off center or the swirl I was trying to do didn't work out. Modelling paste is so messy to wipe off. I think I only got one good one out of all of these. On the bright side, I like my new modelling paste a lot more than my old paste. It's not translucent for one and definitely more icing-like. I'll try to do a comparison tomorrow.

I haven't done anything to the orange slices and I've only given the cake a few coats of varnish. I've been trying to figure out the best way to decorate it--the way I had meant to do it looks kinda strange. As for the biscuits...

The cats didn't turn out as well as I had hoped, but with a little more practice and a few more experiments I hope to have some really cute critters soon. I went with brown acrylic paint for the biscuits, but paint is so thin that you can still see all the texturing. The biscuits look more like they are really half chocolate biscuits than cream-coloured biscuits dipped in chocolate.
Posted by Pei the Blargh at 02:17 No comments: