Happy 2017! Can't believe how long it's been since I've posted. My health wasn't the best last year, and I felt extremely unmotivated to do much in the way of blogging (or much of anything except for stressing over work really).

Shout out to Sylvanian Kingdom for doing a sweet write up on their blog about Plastic Candy! It's the first time I've ever been featured on a blog like that (that I know of). It's wonderful to know that people still like reading my sporadically updated blog. I don't know French so I had to rely on Google Translate.

I bought a very cute winter themed My Melody Re-Ment set last year, and I've been wanting to do a review of it for several months now. Almost everything in this set scales well with Sylvanians, and best of all, it's all rabbit themed. I don't really like using anything depicting humans in my Sylvanian dioramas--in my mind it's a cute fuzzy anthro world that's almost 100% animals. Almost, because sometimes I use Pinky St figures.

Anyway, enough blathering, and on to the review! 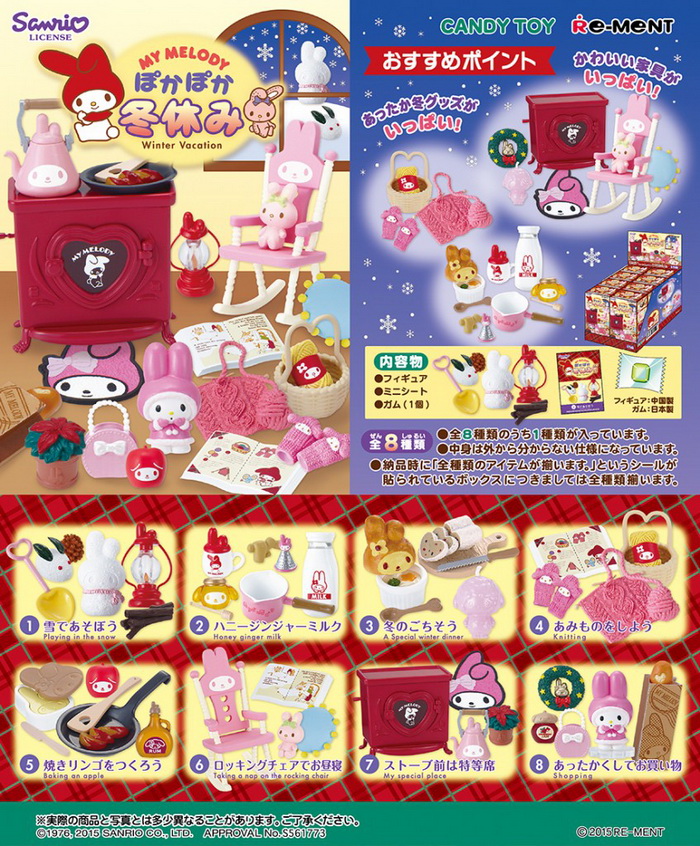 My Melody is a Sanrio character. She's usually depicted as a rabbit wearing a hood. I'm going to do things a little differently for this review. Instead of reviewing each set separately, I'm going to combine some sets and set up a little scene with some Sylvanian furniture for each of the review pictures. That way it's easier to show how these items would look with a Sylvanian figure. This release has eight sets in total.

This first scene contains set #4 Knitting, and #7 My Special Place. The rocking chair is Sylvanian.

Knitting has an open knitting instruction book, a basket, a yellow ball of yarn with My Melody's face on the label, some knitted mittens and a work-in-progress knit. The mittens are a little weird, but they're meant to depict My Melody's head. The extra appendages sticking out of the back are her ears and not for extra fingers! The book lacks detail--it's a smooth piece of plastic with some stickers on it. Re-Ment has made more detailed books in the past, so this is quite disappointing. The basket came to me with the handle bent from being smooshed up in the packaging. A quick dip in hot water and it's back to normal. I quite like the work-in-progress knitting item. Sylvanian Families has a similar item but it's only found in the hard to get Grandmother at Home set. This makes an excellent substitute and it's a lot more detailed.

My Special Place comes with a red fireplace, a potted plant with a My Melody design on the front, a pink kettle and a rug. I love the kettle and the fireplace. The stove really opens, and I wish it lit up like the Sylvanian fireplaces. I could probably put a little red LED in there, hooked up to a small battery. I'm not too fond of the rug. I think the dark black outline really overwhelms the rest of the design. 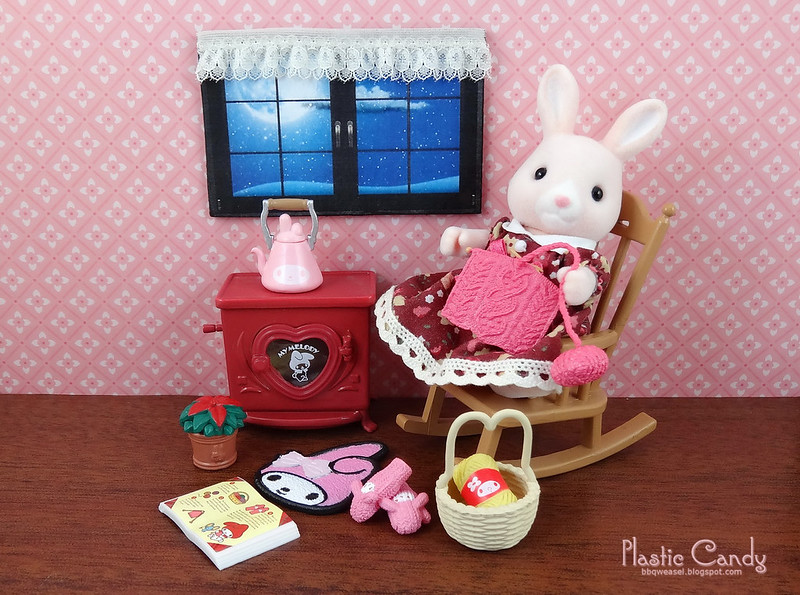 Next is set #2 Honey Ginger Milk. The table and the shelves in the back are Sylvanian.

Honey Ginger Milk contains a bottle of milk, a mug with a lid, a jar of honey, a honey dipper, a pink saucepan, a grater and a piece of ginger. The milk is huge! Compared to the rest of the set, it seems disproportionate. Maybe it's just family sized?  I do wish that the ginger had more detail on it. It looks like a brown blob. The saucepan is a perfect size for Sylvanians. It even fits on a Sylvaninan stove top. I like so many things in this set, including the adorable mug and the little grater. I've never tried honey ginger milk, but it sounds like a yummy thing to have on a cold winter's evening. 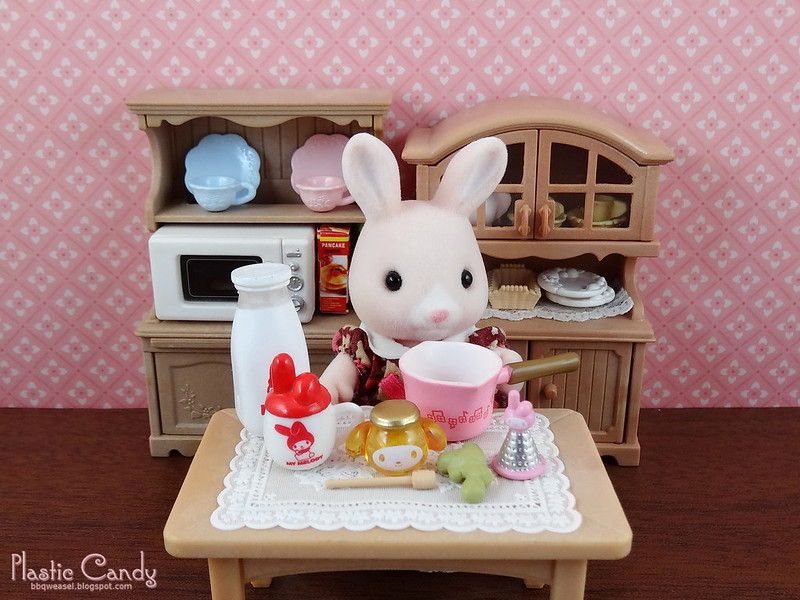 Now for #5 Baking an Apple. The table, shelves and stove are Sylvanian.

Baking an Apple comes with a pan, a wooden spatula, a bottle of rum, a tub of butter, a knife, an apple and some cooked apple slices. The butter is an insert that can be removed from the tub, and it also has an indented design on it featuring My Melody's face. The apple looks really cartoony, and I'm not sure it really fits in with the rest of the items. All the other items have enough detailing on them to make them look at least semi-realistic, but the apple is very simple, with none of the lines and markings that a real apple would have. The pan scales well with a regular Sylvanian stove. 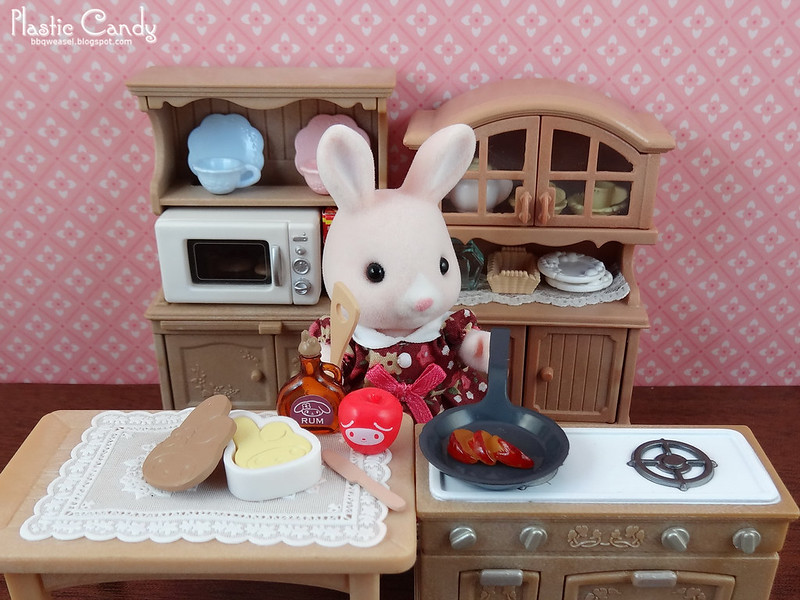 I decided to combine #3 A Special Winter Dinner and #6 Taking a Nap on the Rocking Chair together. The table, shelf and magazines are Sylvanian.

A Special Winter Dinner has a sheep candle, a ramekin filled with soup and bread lid, a soup spoon, a fruit cake, a bread knife and a cutting board. The sheep candle is pretty 'eh' to me. It has a hard time standing up on its own properly. The soup is great. It's a bit big, for Sylvanians, but I guess that it'll be great for someone extra hungry (judging by how many bakeries and cake shops Sylvania has, it won't be hard to find extra hungry critters). The soup is a removable insert. The spoon even has woodgrain detailing on it. The cake and bread knife are nice accessories, but the stand out piece of this set has to be the cutting board. It has woodgrain detailing and a meticulous design etched into the wood. I've taken an extra picture to show all the details in the soup and board accessories.

Taking a Nap on the Rocking Chair comes with a pillow, a rabbit toy, an open book and a small rocking chair. This is probably the weakest set in the series. The pillow is unattractive, and the book lacks detail. It's the same style of book as the one in the Knitting set. The rabbit is cute, but has a hard time sitting up on its own. It sits in the rocking chair very well though! The rocking chair is detailed, but it's too small for Sylvanians. I thought that maybe a baby figure would fit, but it's too narrow to comfortably fit a baby figure, and the whole thing tips forward when I try to wedge a baby in there. Maybe the little kangaroo baby would work? 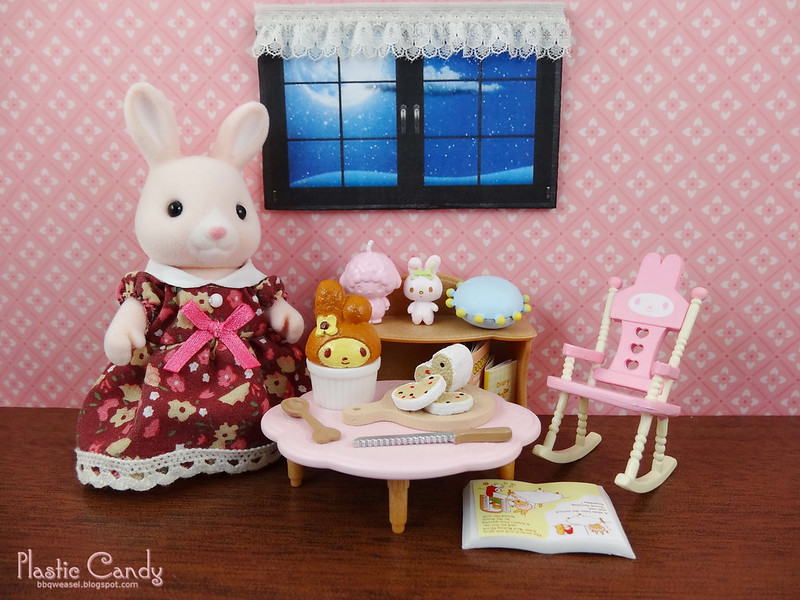 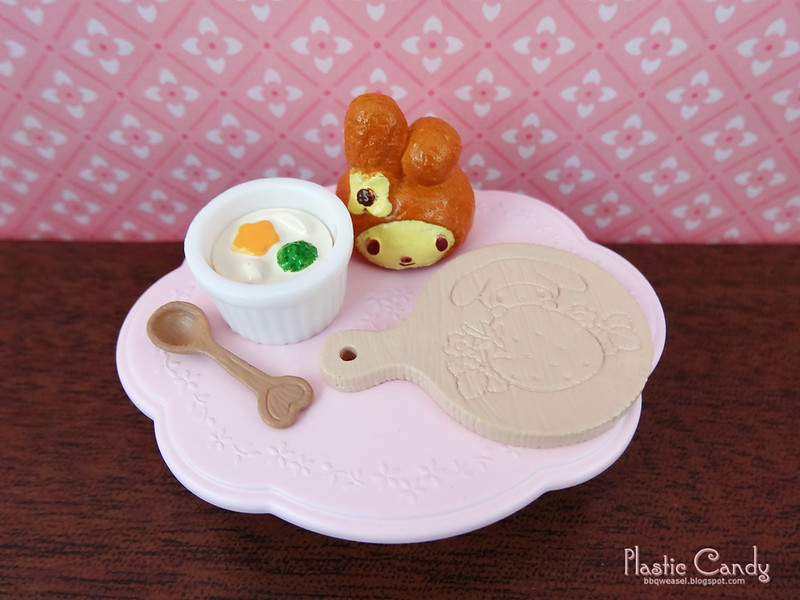 Time for #8 Shopping. The table and shelves are Sylvanian.

Shopping is presumably a nice winter shopping trip out to get some goodies! It comes with a purple handbag, a wreath, a jar of jam, a loaf of bread and a paper bag, and a My Melody figurine. The purple bag scales well with Sylvanians, but I think it works better for a sibling figure than an adult. The label on the jar came to me all crinkled. The wreath is really pretty and the loaf of bread has heart designs on it. The bread isn't as long as it looks in the picture. I had it poking out of the bag, or it would have been entirely covered up otherwise. The My Melody figurine is nice and detailed, and comes with a removable base. 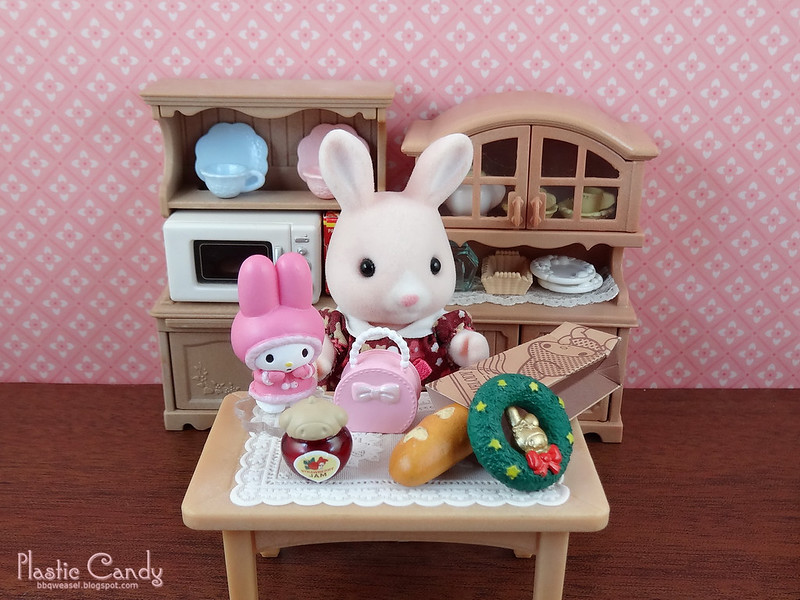 The last set is ironically, the first set in the series. #1 Playing in the Snow.

Playing in the Snow contains a shovel, a bundle of sticks, a pine cone, a lamp and two snow bunnies. The snow bunny with the green ears is a something that kids in Japan tend to make. The snow figures are nicely detailed and will fit in with any winter scene. The sticks and the pinecone are not as detailed. My favourite piece is the lamp. It even has a little flame in it! This scene would have worked better if I'd shot it as a twilight scene, heh. 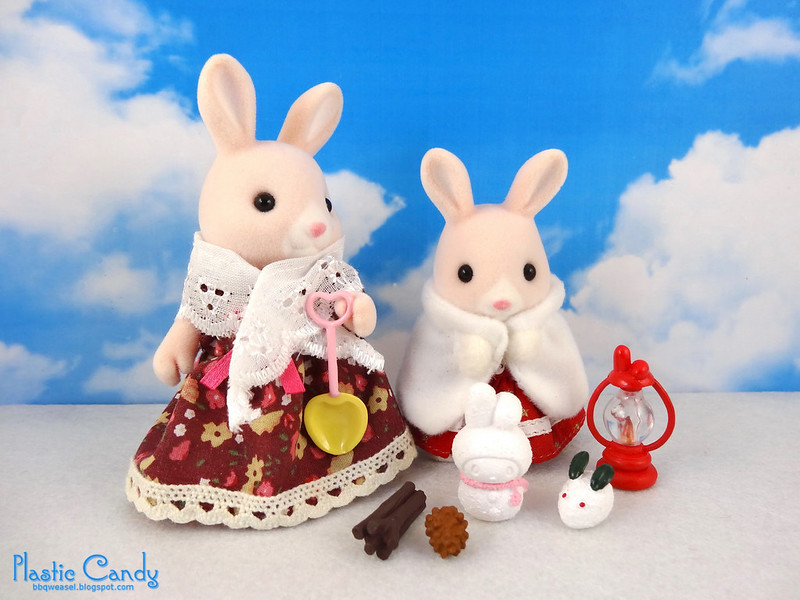 That concludes the review. It's a lot longer than I had intended, and I hope no one got bored. If you like the set, it's currently available on AmiAmi and Fan21hk.