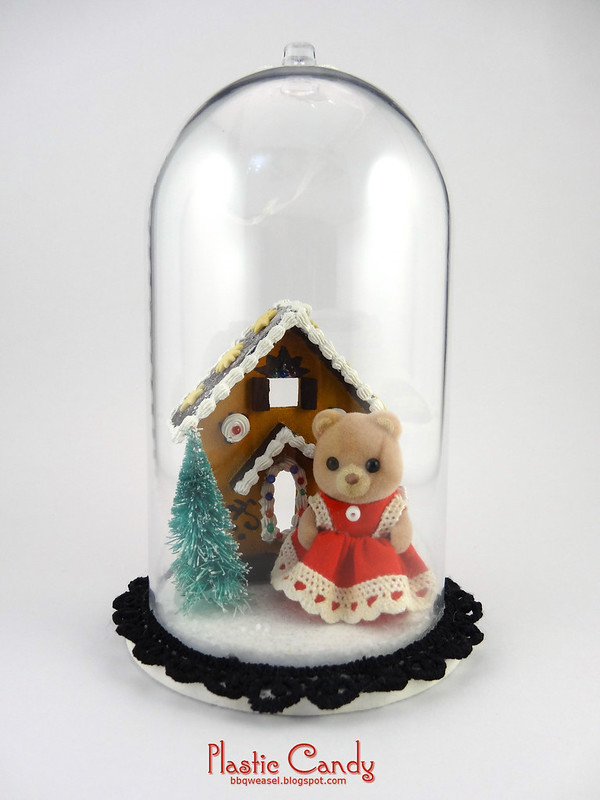 Joined the Sylvanian baby ornament swap. Now that my partner has received it, I can post about it. :D I'm really glad she likes it because many times I looked at what I was doing with that gingerbread house and my eyes felt like they were going to fall out from sheer exasperation. It didn't turn out the way I had intended (I had envisioned something a little more simple and clean looking). I still need to practise my piping, it's rather messy looking. At least I discovered a better way of cleaning my piping nozzle. Wet wipes FTW. Don't know why I never considered something so simple. I never liked using that piping nozzle because of the clean up, but now it's much simpler and I can read manga in front of my computer while I'm doing it.

I've been finding it harder and harder to want to do anything crafty lately. I just feel so blah about everything in general.

I've been practising sewing on a Baby Bratz doll. My sewing is still shocking, but at least I can say I made some clothing with *gasp* the help of a needle. I didn't sew anything for the baby swap. The Sylvanian bear's clothes are held together using my best friend, craft glue. I really should do more sewing. It's probably easier and less messy to stitch something together than to glue down every seam (the dreaded glue strings, ugh). I learned a few new things about bashing cloth together to form clothing together after doing the Bratz dress and the SF dress. I just have to apply that knowledge to actual sewing, hah...

The original ornament was something I got from Kmart. It was a snowy scene with a white house and two pine trees.

Hopefully I'll feel more alive once the holidays kick in mid next week.

I bought my first few Amiibos. Animal Crossing ones. I can't resist Animal Crossing. Nintendo's got my wallet in a death grip. Send help.
Posted by Pei the Blargh at 23:15