After flocking that chair cushion, I found a little bootlegged sheep and thought it would be a great figure to experiment flocking on. I bought some flocking powder from BNA Model World ( I just chose the cheapest ones, the ones from The Parts Box) and used this tutorial. Flocking a figurine is a lot more time consuming and messy than flocking a flat cushion. Very messy. Anyway, I decided to create a little black sheep baby.
The bootlegged figurine. It's been lying forgotten in an unused handbag for about a year. 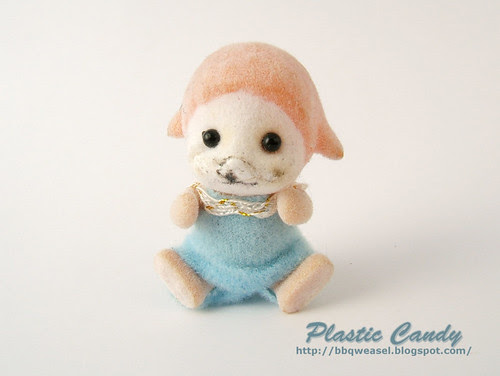 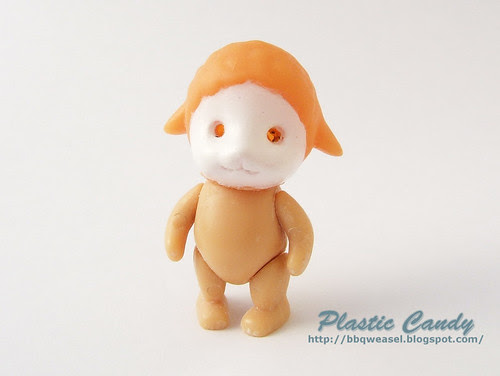 I painted the sheep grey. In retrospect, I should have painted it black, but I didn't want the grey spot to end up looking too dark. Now I think black would have given a better effect. 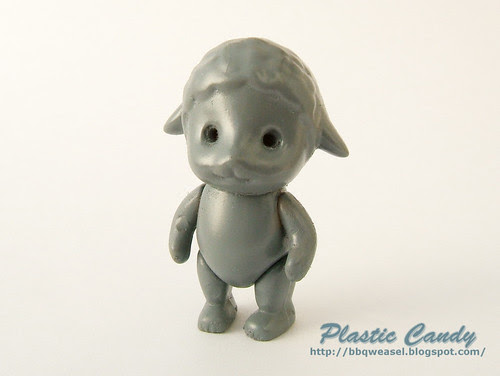 And several days of glue applying, drying and getting dust everywhere, and probably breathing inb more flocking than is good for me (seriously, wear a mask folks) she's done! I think I will call her Emily. It's kind of close to Emma, and I want them to be cousins or something, heh. 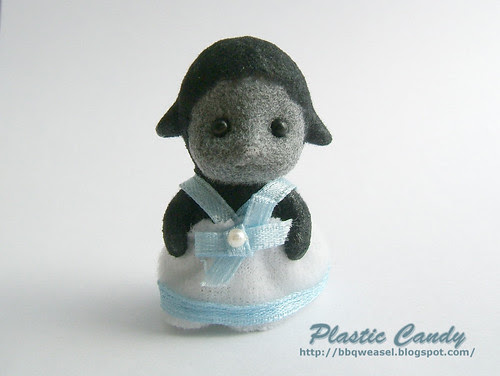 I want to make a dress for her in the future, but this one will do for now. There are a few shiny spots on her leg and arm where I applied too much glue, but luckily with the dress on it's hard to see. I also should have painted on her nose instead of painting the flocking, I think it would have looked better. Also I'm just guessing at where the nose should be now as the flocking obscured so much of the fine detail.

Here's a picture comparing her to an original Sylvanian sheep baby. 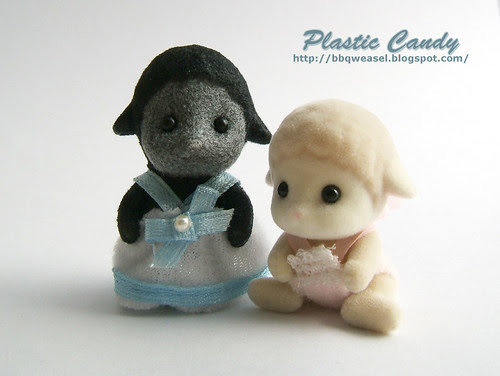 The original has a fatter, cuter head mold IMHO. The bootleg has a head that looks weird and skinny. I'm tempted to get a standing baby to flock so I can have a black sheep baby with a fat head. Not anytime soon though, I'm pretty sick of flocking for now.
Posted by Pei the Blargh at 15:01 7 comments:

I've given my little zombies limbs and attached their accessories to them. 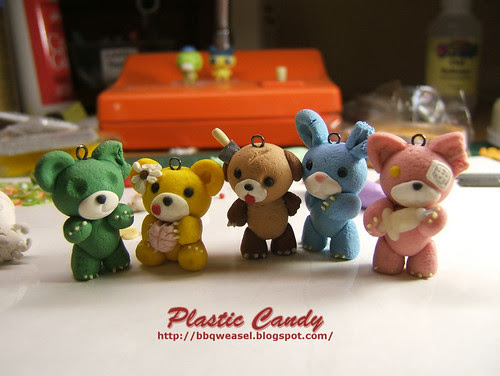 All except the green bear have accessories. The blue bunny is actually hiding a knife behind his back. All they need now is a coat of paint--except for the pink cat, he needs a tail and some bandages. I broke one of the petals off the yellow bear when I was putting her limbs on, but the good thing about zombies is that it doesn't matter. :p

The stone effect paint has finally dried and here's how the mansion looks like mostly put together: 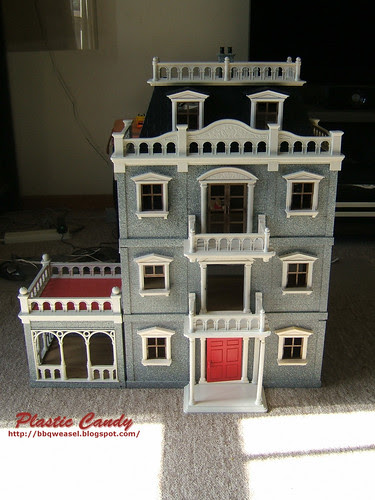 I haven't reattached some of the doors yet.

I still need to correct all these mistakes I made while painting the building. *sigh* Carelessness makes more work! Here are just some of the things I need to fix, and there are two or three spots like this on every floor of the building. 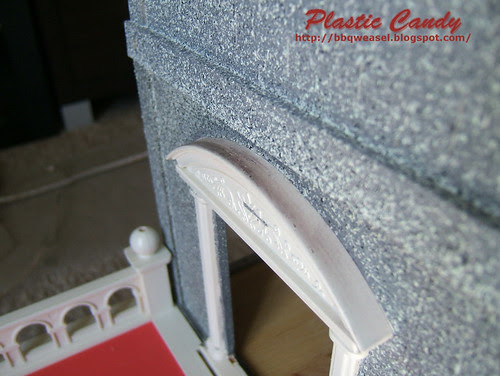 Spots where I've removed the grey smears, but unfortunately had to take the nicely painted white with it. 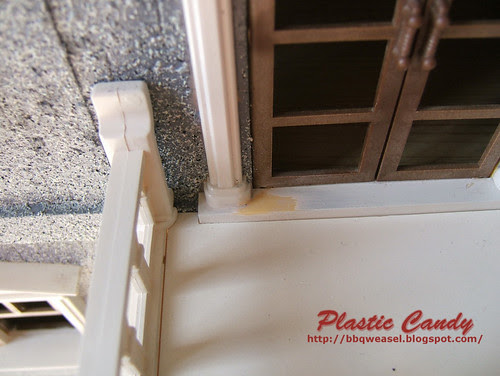 That's all the updates I have for now. I hope to post about another project I've been doing, hopefully by tomorrow; but more realistically, it'll probably happen the day after.

Back again! With updates on all my projects

Back from the long hiatus! Now that it's school holidays here in SA, I have more time and energy for crafts and blogging. :) I still haven't been getting many teaching jobs, but things picked up a little at the end of term. All I can do now is continue volunteering at different schools everyday to keep myself visible and be ready to jump on any opportunities I see. I hope next term will be better. I really want to land a contract to teach for more than one day at a time. I'm also thinking of taking up a casual cleaning job on the weekend to bring in more money.

Anyway, on to the projects! I've been planning to open up an Etsy shop selling little critters like these guys: 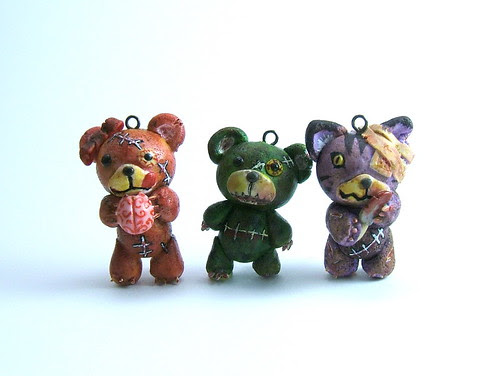 They are about 4 cm tall and were originally meant to be phone charms, but after asking at the Regretsy forums, turning them into necklaces seem to be the more popular choice. I'm working on five more now since the three in the picture are all spoken for and I'm still waiting for my necklace making supplies to arrive. 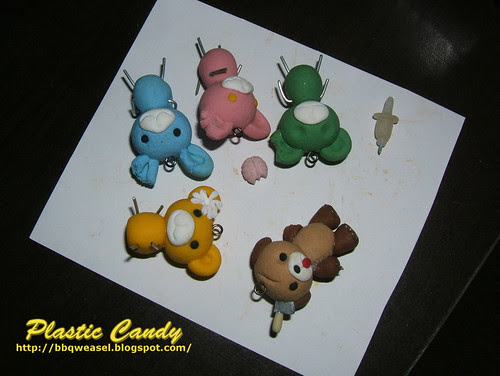 I've reworked the brain design, the brain the little pink bear is holding didn't turn out quite the way I had imagined it. I was trying to go for a cute stylised brain, but oh, well... I'm still experimenting with ways to make the claws more durable, but I don't think the whole 'coat little wires with liquid clay' thing is going to work out. It breaks off and wire claws are pointy. I'm probably not going to end up listing the puppy for sale because he's the one I used to experiment metal claws on. All the others will have straight up polymer clay claws. I'm also making these ones to be able to stand up on their own, unlike the first three--I had to use blu tak for them.

I've also been experimenting with flocking powder. I was sold some vintage Sylvanian chairs and told that they were in 'excellent' condition. They were NOT. Flocking was rubbing off in places and it looked old to boot, so I decided to buy some red flocking and try reflocking the chairs myself. 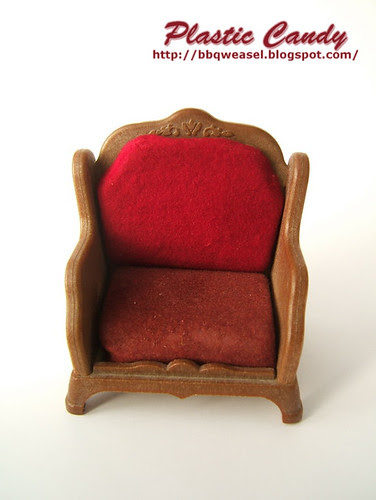 The top cushion is the one I reflocked, and the bottom cushion is still in the condition it came in. I'm pretty pleased with the results and I'll take a photo once I've finished reflocking everything. (Again, one of those things I keep meaning to do but I keep getting sidetracked) I'm also going to try reflocking a little fake sheep figurine I have; just waiting for the supplies to arrive.

An update on the Willow Hall I was painting: 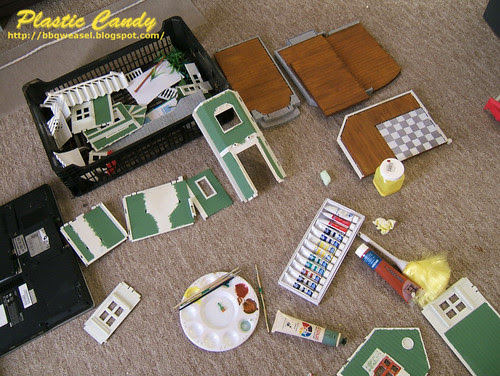 Yeah, nothing but some of the floor done. I've hit a stone wall with this project. Put together, the white highlighted areas are too plain and I haven't been able to figure out what other colours would go well with the darkish green and the white. I've tried reddish brown and dark green, but it doesn't look very good to me on this building. The green colour of the main body is supposed to be lighter, but the paint darkened after drying. I had some highlights planned for a lighter green body colour but they don't really work with the current colour. I think I will try some light green highlights and maybe a few darker green ones. 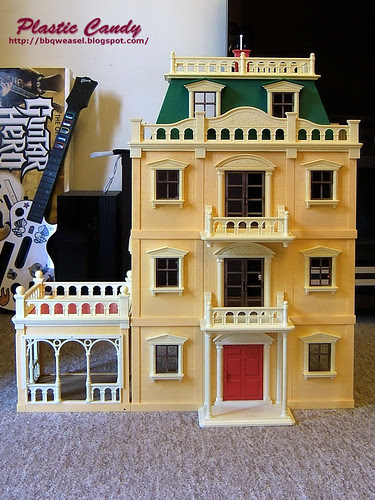 I found this awesome vintage Sylvanian Families Grand Mansion at a dollshouse store near Adelaide. I was floored at finding this building there; I see them pop up all the time on Ebay UK, but never in Australia. It's a building I never thought I'd ever own because of what it would cost to ship from overseas. I was so excited I'm sure I overpaid for this thing, especially in this condition.

As you can see, the white parts are significantly yellowed and there are a lot of parts missing. Most of the major parts are there, it's mostly the small fiddly bits that are gone like the lamps, foot scraper, flower boxes, clothesline, part of the conservatory railing, the canopy, etc. The only missing parts I really want are the front door lamps, the missing railing and the little sticking out bit on the conservatory where you can hang a flower pot from. Mostly the lamps. I saw some of these parts on Ebay a couple of months back but I was too stingy to fork out for the more expensive shipping method the seller was using. I kinda regret that now because I haven't seen any of these parts turn up lately!

Another awesome thing about this building is that all the floors are just stacked one on top of the other, and are removable. Makes it easier to paint and to take photos in.

I started out by repainting the roof. 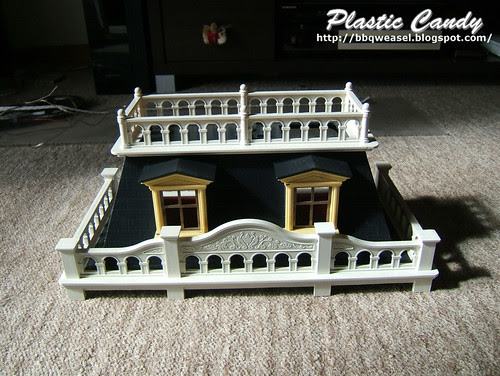 In this picture the windows haven't been painted yet. They look so yellow next to all the newly painted white parts! I like the details on the front of this building, looks so cool. 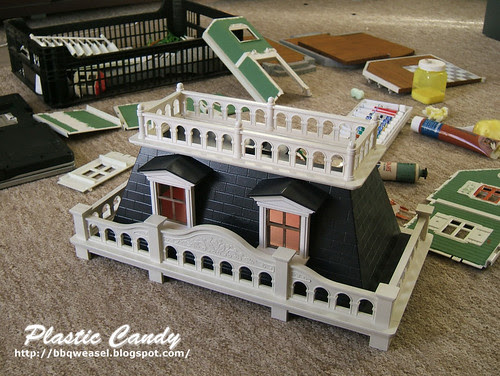 I keep forgetting to paint the chimney. I also need to build a new trapdoor for the roof, both the trapdoor and the ladder leading up to it are missing. Ladders I don't mind so much, but one cannot have a large gaping hole in the roof! 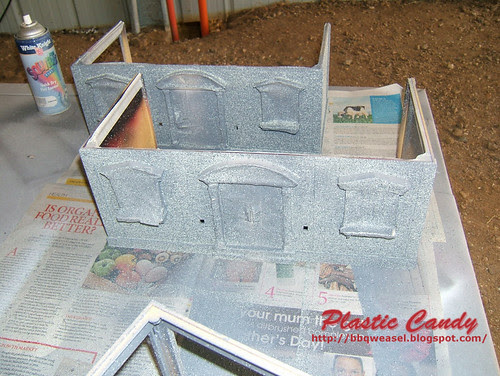 I used a stone effect texture spray for the main body and a gray primer as the undercoat. I think I should have used a white because the colours came out a lot darker than I wanted. Oh well, too late now.

And I've been careless because this happened: 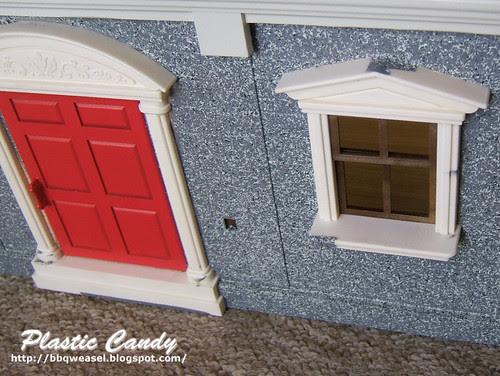 The masking tape and the areas I tapped off are pretty similar in colour so I missed a few spots... :p

Here's how it looks like with all the masking tape taken off: 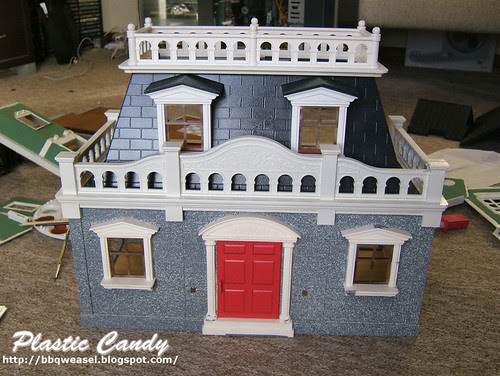 The red door is very striking, but it's not going to be permanent because I don't like it. I'm thinking of painting it black with some golden highlights instead.

Texture paint is very messy and sometimes it clumps up and makes big blobs. That's probably the result of my crappy spraying skills though. It also tends to obscure some of the finer details. It also goes everywhere when you remove the masking. I might just try using normal sprays or acrylics next time I need a stone effect.

That's it for now, I'm hoping to finish the Grand Mansion before the holidays are over!