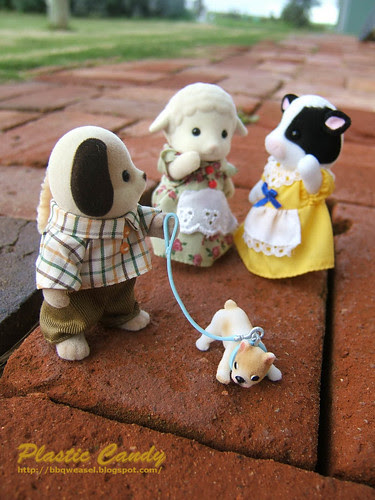 Harold: Look at what I just got!

Barbara: You know, this situation seems a little odd for some reason. 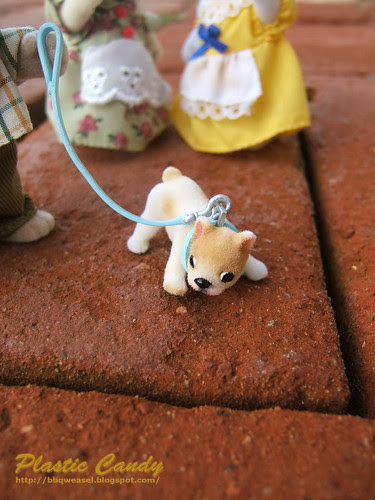 Harold: What? Nah, look at him! Isn't he just a cutie? Well, maybe he's a little bug eyed. His name is Mr. Puggles! 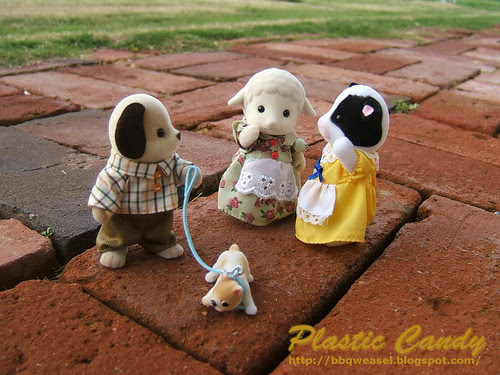 Daisy: It's not really Mr. Puggles. Never mind, I think you two make a lovely pair. Take good care of him!

I've already posted these pictures up on Flickr and the Sylvanian Families forums but I thought I'd stick them here as well to make up for my appalling lack of blogging activity. I've really neglected this blog this year, and I really want to get it up and updating on a more regular basis. I've decided to try to update at least once a week from now on.

I love how well the leash and dog fits scale-wise with Sylvanians. I wish Re-Ment still made flocked animals *sigh*. All of their recent ones have been carved, solid plastic. I think the fuzziness of the flocked creatures makes them extra cute!
Posted by Pei the Blargh at 23:01 3 comments: 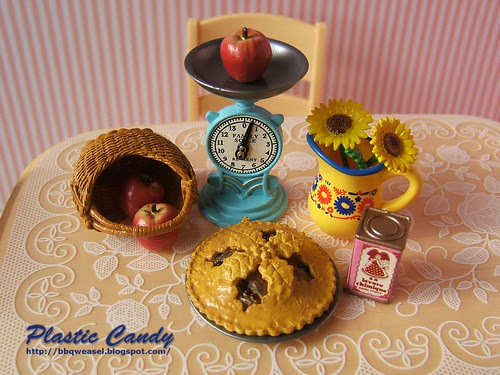 I finally photographed some of my RE-Ment. (FYI: RE-Ment is a brand of Japanese mass produced miniatures, so I didn't make these!) I originally took this for the local country show but at the last minute decided not to enter. I didn't think it was good enough to be worth the effort and cost of entering, then paying to go into the show grounds and waiting till the end of the show to collect the photo. So pic goes on Flickr and this blog. It's been a while since I just photographed random toys and it was really quite enjoyable. I really need to start photographing more toys again; set ups are such fun!


This is another thing I was going to enter in the show but didn't. It was going to be an orange themed tea setting. I was rushing to finish it because the deadline for the show entries was much earlier than I expected, but in the end decided not to enter for the reason above, and also the fact that finishing it on time was stressing me out (I'm not good at making clay items fast) and I had more important things I needed to finish (teaching materials prep).

The yellow cake is supposed to be an orange cheesecake, and the yellow didn't come out as deep as I wanted unfortunately. Maybe it'll be better as a lemon cheesecake? There are also white spots on it; I think they may be air bubbles. :( I made another one before this which has an orange top but I really don't like it.

I plan give the round biscuits and that pile of orange slices a 'dipped in chocolate' look. Right not I'm undecided whether to use acrylic paint or to use liquid clay. The star biscuits will either get a chocolate chip in the middle or something red. Maybe a nut instead? See first la.

I wanted to give those cupcakes a swirl of icing on the top and decided to try the air dry clay + PVA glue trick I found on Atelier Dolie. It didn't work so well for me. Once I think I added too much water and the piped icing wouldn't hold its shape and sank down into a shapeless blob. Next time I tried with less water and it just wouldn't come out of my icing tip. I think that this technique might be more suited to the larger tips used in Sweets Deco than my tiny PME 42C tip.

If anyone has any tips on what to use for piping cream, please let me know. Right now I'm just going to go back to using Josonja's Texture Paste until I can find a better alternative. Tiff of One Dessert Please recommends using Mont Marte Modelling Paste, and I'm going to see if I can find it locally. Hopefully it's a more brilliant white than the off white of my current paste.

I must talk about the little cat shaped cookies in the pic. I used this paper punch for the shape. 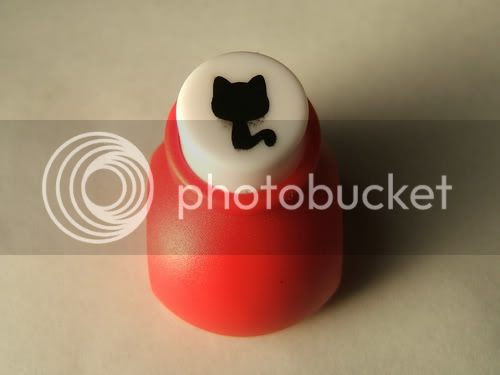 http://www.blogger.com/img/blank.gifhttp://www.blogger.com/img/blank.gif
I'm going to have to put a piece of tape over it because the black ink smudges. :( I first saw that punch on Snowfern's blog and immediately fell in love. I mean, what's there not to love--it's a cat with a giant head! Sooooo cuteeee!!! I didn't have much hope of finding it, especially living where I do and I had never seen it on ebay.

I found it on Etsy. I wubs my kitty cat punch <3 Now if I can find the others in this series...the stars and the bunny are too adorable...

I made this gingerbread house a while back, but never got around to decorating it. 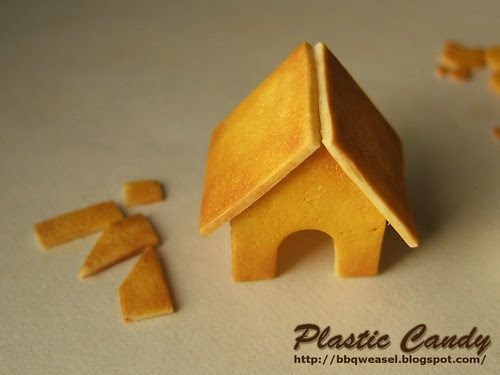 Now I've picked it up again and I'm still wondering what to put on there. Maybe Ihttp://www.blogger.com/img/blank.gif'll make it orange themed like everything else I have haha. And the pieces on the side is the chimney. I was rolling it between my fingers and trying to decide how to decorate it when it fell to pieces. Guess cheap superglue is not necessarily the best thing to be using. :P

Oh yeah, I got the plans for the house from Pine Studio, which has many great tutorials. Next time, I'll make my own plans. I like to link to my tutorial sources, I hope it's useful to others reading this blog. :)

I actually made these about two weeks ago but haven't been able to get good pictures. I still haven't but I'm kinda fed up now so I'm just sticking with these pictures. 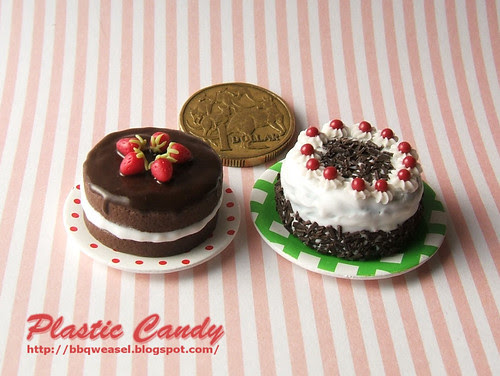 A chocolate cake with strawberries and whipped cream and a black forest cake. I'm not happy with the strawberries, I think they don't look realistic enough. Another problem I'm having is with the piped cream bits on the black forest cake. I used acrylic texture paste as I felt that liquid polymer clay was too sticky and while the texture paste held the piped cream shape wonderfully the colour was wrong. I used liquid clay to ice the rest of the cake and the piped cream bits are more of an off white. I'm going to try a trick I learned from another blog with some air dry clay and pva glue next, so we'll see how it goes. I've tried piping with this air dry clay before but only used water and it wouldn't stick to anything! I'm hoping that glue trick will work.

Another thing that bothers me is the cherries. They don't look real at all to me, and I think that partly that has to do with how round they are :P I'll put some indentations next time where the stalks are supposed to go. I bet that'll also help with the whole tiny balls rolling off and everywhere when I tried to get them in the oven.

I also made cupcakes for the first time. 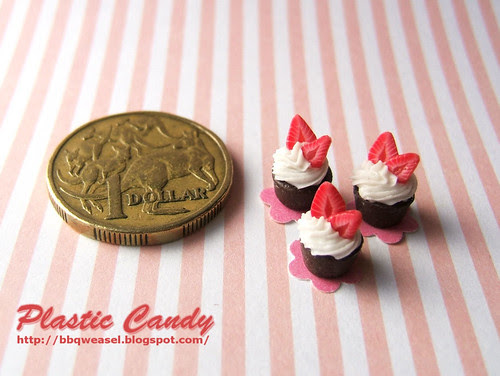 I need to find something that will make a cupcake mold with those indentations to emulate cupcake cases. I used the end of a sushi soy sauce bottle, those cute ones that are shaped like fish. It was the only thing I had that satisfied me size wise. I also need more piping practice, I can't tell you how many times I wiped off the icing from those things! Or how much texture paste I wasted.I also ended up smearing texture paste all over the cupcake in the process btw.

Also, I took this pic for this thread: http://bsfforum.runboard.com/t2411 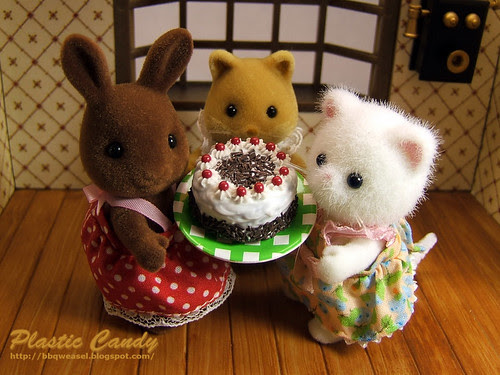